We are absolutely thrilled to announce we have been awarded the
prestigious 4 star AA rating, along with the announcement of the opening date for
The Garden Secret Spa which will open its doors on Friday 18th May 2018.

We have always been well known for our incredible, customer service, hospitality, grounds and being one of the area’s leading hotels, but after an amazing development schedule the hotel enters a new stage. In January the hotel received a Civic Honour, acknowledging the years Charles Paxton Markham lived at Ringwood Hall. The commemorating plaque proudly celebrates the historic significance of the grade 2 listed hall.

Recently purchased by new owners in 2016 the stunning building dating back from 1823 has received over £2 Million of Investment over the past 18 months, and further projects are already planned. The hotel and our team have been working hard over the past year to implement new ideas, services and products to its guests and on Wednesday 18th April the hotel was visited by the AA’s Mystery Shopper who announced the hotel had achieved its 4 Star Status.

The announcement has come at a perfect time for the us, as we are just about to open the doors to our new
Garden Secret Spa. The Luxury Spa has been under construction since early December 2017 and is to officially open on Friday 18th May 2018. The separate spa building features a Vitality Pool, Herbal Sauna, Foot Spas, Himalayan Salt Sauna, Blossom Steam Room, Ice Fountain, Experience Showers, Relaxation Lounges, 7 treatment rooms and its own Brassiere. The Garden Secret Spa is Derbyshire’s newest luxury spa and offers not only a great service to our guests but Derbyshire and Yorkshire residents also.

Rona Davies, General Manager of the Hotel said “We are delighted to have been awarded the 4 star status, the team have worked incredibly hard over the past year to ensure that our service exceeds our guest’s expectations and this accolade truly rewards their efforts. Having been at the hotel for 19 years, the recent investment into the product and the opening of the spa, gives Ringwood Hall Hotel and Spa a new and welcomed lease of life” 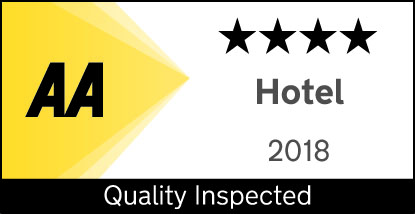